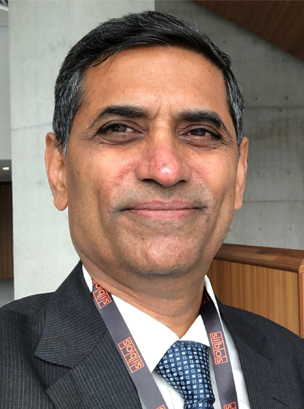 Nandkumar Saravade is currently working as CEO Reserve Bank Information Technology Pvt Ltd (ReBIT). ReBIT has been set up as a fully owned subsidiary of RBI for technology management and cybersecurity for RBI's systems and the Indian banking sector. Till recently he worked as CEO Data Security Council of India - a think tank specializing in cybersecurity policy research and advocacy.

During 2013-15 he was an independent security professional and cybercrime expert advising Ernst-Young and ICICI Bank.

Till September 2013 he worked as Director Citibank India heading Security Investigation and Vigilance.

During 2008-2011 he worked as General Manager Financial Crime Prevention Group ICICI Bank where he looked after fraud risk assessment and controls reviews application screening and vendor due diligence transaction monitoring investigations and regulatory reporting and compliance.

Till 2008 Mr.Saravade served with the Indian Police Service. His last assignment in the IPS was Director Cyber Security and Compliance NASSCOM which involved policy formulation on cybersecurity and privacy capacity building for law enforcement advising NASSCOM members on incident response management and organizing mass awareness campaigns on cybersecurity. Mr.Saravade served in the Central Bureau of Investigation for seven years looking after enforcement of the Prevention of Corruption Act investigation of bank frauds and economic offences. Mr.Saravade was awarded the Prime Minister's Baton and Revolver for being the Best All-round Probationer of the 1987 batch of the IPS and also the Indian Police Medal for Distinguished Services. He has served on several technical advisory bodies such as the High-Level Group on Electronic Banking Controls  Governance and Technology Risk Management Standards set up by the Reserve Bank of India RBI the Cyber Security Project of Government of Maharashtra and Technology Information Forecasting and Assessment  Council TIFAC of Government of India.

He is a regular speaker at apex training institutes technical conferences and industry forums. He holds a  Bachelors degree in Engineering from Government College of Engineering, Aurangabad as well as a Masters degree from Indian Institute of Technology Bombay.