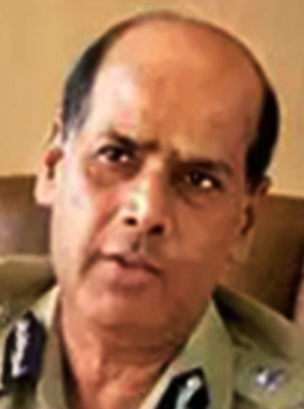 Anami Narayan Roy  is a distinguished former civil servant, having served in the Indian Police Service in Maharashtra and Govt of India for over 38 years. He held a wide variety assignments both in Maharashtra and the Central govt including Commissioner of Police, Aurangabad, Pune and Mumbai and retired as Director General of Police, Maharashtra, commanding a 2,25,000 strong Force .

While in Govt of India, he headed the operations of the elite Special Protection Group, looking after proximate security of Prime Minister, former PMs and their families, in which capacity he travelled extensively within India and overseas and interacted with the forces and governments of many foreign countries around the world.

Known popularly as the People's Commissioner, he set up many citizen-friendly schemes and systems to resolve and fulfil people's problems and expectations like Citizen Facilitation Centres in Police Commissioner's office and later in all Police stations where all requirements of people from Police were dealt with in transparent, time-bound and hassle-free manner, Mumbai Police Infoline for giving all information from and about Police through a toll-free number, Elderline for senior citizens, Slum Police Panchayat etc.

He was appointed Advisor to the Governor of Andhra Pradesh when the state was under President's rule in 2014. In that capacity, he discharged effectively the responsibilities as a Minister of many departments of the state like Home, Industry and Commerce, Housing, PWD, Health, Medical Education, Social Welfare. He also dealt with the separation of Andhra Pradesh in two states AP and Telangana and supervised the General Elections of 2014 in both states.

Post retirement, Roy is engaged in the social/non-profit sector, he runs a not-for-profit company Vandana Foundation under section 8 Companies Act, for supporting people at the bottom of the pyramid with livelihood. Vandana Foundation helps widows of farmers who committed suicide in three districts of Vidarbha Wardha, Yavatmal and Amaravati to make them financially independent through micro-enterprise.

He is on the Board of Directors of some prominent companies like HDFC Bank, Glaxo Pharma, BHEL and some others. He is also involved in many other companies in Advisory capacity, on the India Advisory Board of Encore Capital Group of USA, TrueNorth Private Equity Fund. He brings with him a wide and rich experience of public service, functioning of governments at the state and central level and of his association with the corporate world.