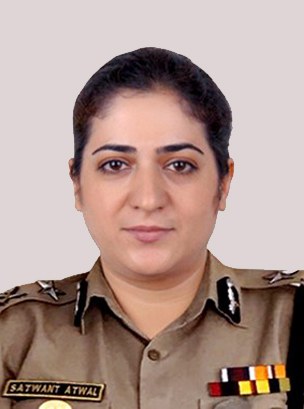 An IPS Officer of the 1996 batch, Ms. Satwant Atwal Trivedi has the distinction of being the  firstlady IPS of the state of Himachal Pradesh as well as the first lady officer of NIA & BSF. Ms. Trivedi has credited to her name a rich saga of her commendable services as a Police  Officer in various positions of her cadre of Himachal Pradesh as well as other distinguished  police organizations. Furthermore, she has successfully initiated India’s first implementationof Artificial Intelligence in Border Security Force. She is a gold medalist in Clinical Psychology and in German, she has bagged the meritorious  distinction of a Diploma in Investigation and Leadership from FBI National Academy, Deptt  of  Justice, USA. She has served in the National Police Acaademy, faculty at National Police Academy, headed the district Police Armed Battalion at SP Rank, and is presently heading the Intelligence Directorate of Border Security Force and is the joint secretary of NATGRID. She has been conferred with the prestigious Police Medal for Meritorious Service in the year 2012.